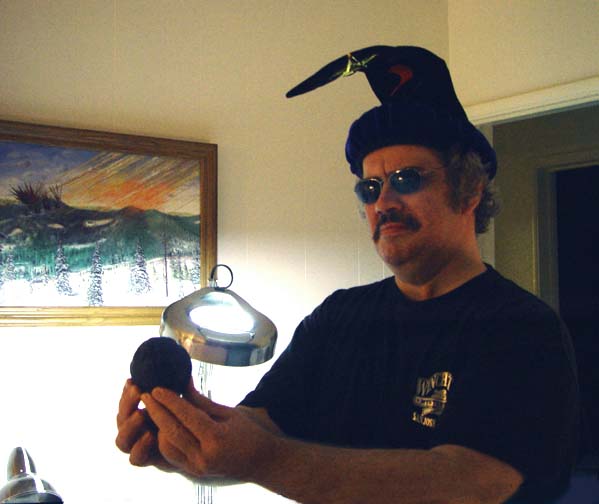 Saturday, March 23, 2003 was highlighted by
the semi-bi-annual Tektite Party put on by Jim Tobin
and Paul Harris of The Meteorite Exchange and ever
so graciously hostessed by Paul's loverly wife, Janice.

(click on image for enlargement)
Swami Shipbaugh conjured up a splendid gathering which
included Bob and Beth Verish, Rick Kujawa, Bill & NinaWhiddon
and her mother, Rob Matson, and myself. All this just by
gazing intently into a spherical Bilitonite Tektite (don't take my
word for it, see above photo). However, no matter how
hard he concentrated he was unable to materialize Laura Croft.

(click on image for enlargement)
Unfortunately, Alan and Cindy Gayda couldn't
make this gathering.However, a new attendee did come, that being
Rob Matson,a very successful California meteorite hunter, who brought
half a table of proof of his outstanding success in gathering
extraterrestrial rocks from space that happen to have fallen
onto the planet Earth right here in the state of California.

(click on image for enlargement)
One of the highlights of the evening was when everyone
raced outside at a VERY SPECIFIC time (7:32PM, or some such
thing – these astronomy types know these things, don't you
know?) to watch the Iridium Slayer satilite passing over Los Angeles at that
very moment, and, just for a second or two, it catches the
rays of the sun and lights up brilliantly. I have to admit, even
without the astronomical sophistication of my esteemed company
I was impressed. In fact, that sucker lit up a second time, though
I never did get what I considered to be a "reasonable explanation"
for that phenomenon. However, the mutterings of these
astronomical sophisticates indicated more than a few of them
were well aware of the laws of physics governing such occurrences…
either that, or they were convincing in faking such understanding.
This is a fun thing, and those interested in future events should visit
http://satobs.org/iridium.html
and check it out, as these things are aparently going on regularly.

(click on image for enlargement)
Of course eating was one of the evening's high points as well,
given that Janice Harris puts on one heck of a feed – stakes and
lamb and smoked turkey, meat balls, and on and on – and that
doesn't even count deserts which included, get this, hand made
bon-bons filled with raspberries.

(click on image for enlargement)
Jim and Paul did have a few goodies out for purchase and I
picked up yet another Sikhote-Aline "breeder." Calvin, The Swami,
Shipbaugh scored a MAGNIFICENT box of Australites that included
a perfect flanged button.

(click on image for enlargement)
Good times were certainly had by all and I was given the treat
of the clearest image of Jupiter and Saturn I have personally ever
seen – through Paul's telescope.