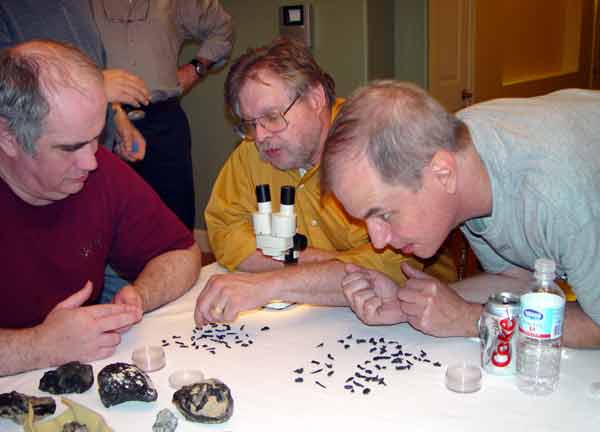 
November 5th marked the first tektite party of the year.
This party was an especially joyous occasion, as it also marked
the "Opening" of the "new" Paul & Janice home, which has been
magnificently remodeled since the last Tektite Party. Especially
impressive was the living room, which offers built in recesses –
in fact, "wall sculpturing" complete with built in lights for
endless possibilities of display capability. Meanwhile, the
kitchen is nothing short of magnificent, with a commercial
stove that had my wife, Angel waxing on about the virtues
of an oversized burner, etc. In addition, the cabinetry included
top glass door and individual built in lighting display cabinets
seemingly endless in number. Besides for innumerable ovens
of every kind imaginable (convection, microwave, traditional,
electric, gas, etc) the kitchen has the largest "island" I have
ever seen, perfectly sized for cutting, chopping and –
Tah Dah! serving hors d'oeuvres… which Janice makes
quite enticingly.
In addition, the dining area is an extension of the kitchen
area, making both seem much larger and allowing for
communication between those seated and those "in the kitchen."
(Click On Photos to Enlarge)

The theme of this particular Tektite Party was Sikhote-
Alin and to my astonishment, I seemed to be the only one
that paid attention to this element and brought my entire
"Sikhote-Alin Zoo" – a collection of mostly animal shaped S-A
individuals. (see See Close Up individual photos at URL below)

A few Sikhote-Alins
However, though no one else brought any S-A specimens,
we were all in for a treat, as Bob Varish brought LA 002,
which is much larger "in person" than I realized. It is most
unfortunate that after coming home and downloading
all my photos that I discovered my "best" shots of this magnificent
specimen were out of focus. Still, it is so
impressive, I have included a blurry photo in with my
other shots of the evening. My sincere apology to all ofyou for my
shoddy camera work. Unfortunately, it doesn't end there, as Rob also
brought his magnificent collection of California Lake Bed recoveries.
Unfortunately, his talk abouteach and every one and their recoveries
and donations occurred just at the time this cowboy was taking a little
shuteye, as a drive to LA will almost alwayspromote such a response.
In addition, I failed to get a composition shot ofthe entire collection,
which is most impressive.

However, apart from a magnificent meal prepared by
Janice and a dessert of Pecan Pie prepared by my beloved
Angel, the highlight of the evening would have to be when
Jim and Paul pulled out a fantastic stash of Irghizites, the
very rare tektite from the Russian crater, Zhamanshin in
Kazahkstan. Rare to begin with, as it turns out, these will
be the last specimens this particular source, who has been
the world's largest, intends to bring out of the site. Those
of us in the Tektite group got first pickings – even Jim and
Paul had not pulled ANY from the huge stash they had
purchased. They had more Irghizites than I have ever seen
in one place in my entire life. In fact, they had more than
I have seen put together in my entire life (which doesn't take
a lot, as I have only seen two or three at a time, any time,
scattered over tens of years). By now it was late in the
evening and only Cal, Rick and I were left and we
jumped on those puppies like dogs on bones. They weren't
cheap – Irghizites never are, but they were the best I have
ever seen in size and shape and many had both the
tiny baubles and surface sheen - a glossy black – both of
which I have only seen on Waber Pearls, while some even
had holes or looped back on themselves to form a "see through" hole.
(see close up individual photos of some irghizites at link below).

By the time we were done Oooing and Ahhhing over thesebeauties,
it was well past midnight and time for the truck home. Another great
afternoon and evening spent in the delightfulcompany of dear friends.


This article is dedicated to the memory of Bill Whiddon
and the other members of our group who have moved on: 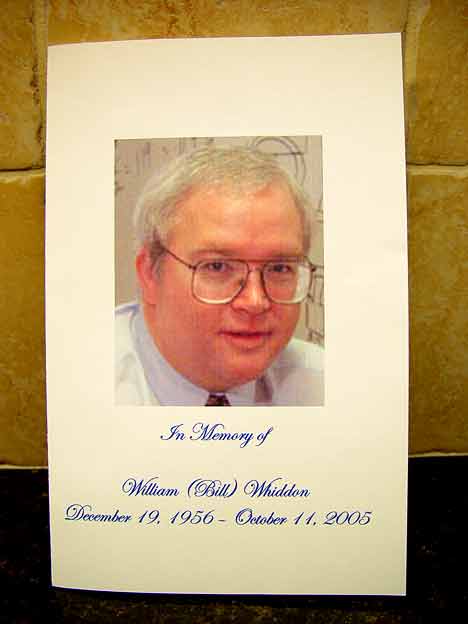 Bill Whiddon
Unfortunately, we have lost a 4th member of the group since
its inception: Bill Whiddon. Bill was a brilliant rocket scientist who worked
for Northrop Grumman. Bill was a gentle man who always lent an insightful
twist toany careful examination of a tektite, usually with a statement such as,
"I wonder what was going on that resulted in XXX," or the like, rather than
boldly claim knowledge of what caused this or that manifestation in a piece.
He was, inaddition to brilliant, a kind person & I can not recall a single
incident of Bill ever speaking critically of anotherperson. He will be
missed and fondly remembered every time we have a Tektite Party.
Since this topic of loss has been essentially glossed over,at least by me,
I would like to take the time to acknowledgethe other group members
that have gone on:

Cindi Gayda
Cindi Gayda was a homicide detective with LAPD and ameteorite enthusiast – one of the few women I have known to be so. She, too,
was a kind and gentle person who was taken from us suddenly
just after retiring from the force.

Don Lohr
Don Lohr was my best friend and assisted Paul and Jim in
assessing commercial value to the individual pieces in the
Futrell collection which marked the beginning of the Tektite
Parties. His loss to me is immeasurable and I regret the other
members of the group were denied the great pleasure of
getting to know him better, as his health began a sharp decline
shortly after the group got going. His interest in tektites was
intense and his mind was unmatched.

Darryl Futrell
Of course, much has been written of Darryl Futrell, the provider
of the collection that inspiredour group and who graced us with
his presence whenever health permitted.
So, while Bill is in great company, he will certainly be
missed by our group, as will all these individuals with whom
we were blessed to share precious hours. Thank you, Bill for
spending time with us while you were on this earth.